On May 10, 1945, the people of Lindenhurst decided to erect a memorial to the 653 veterans of World War II via the creation of a public library. Mayor John C. Blankenhorn initiated fundraising efforts throughout the entire town of Lindenhurst – not just the Village.

On December 20, 1946 the property at South Wellwood and Herbert Avenues was granted a Provisional Charter for an Association Library by the State of New York, with the property being officially dedicated on Pearl Harbor Day - December 7, 1947.

Mayor Blankenhorn appointed the following villagers to the Board of Directors of the Lindenhurst Memorial Library:

A proposition to build a library building by taxation was defeated on June 2, 1950.

Mrs. Frevert, as chairperson of the Board of Directors, met with Mayor Alex Jaeger to discuss the library’s progress. The mayor suggested that if the Library Association would relinquish the Library site to the Village, the Village would very likely build a library adjoining the contemplated new municipal building. 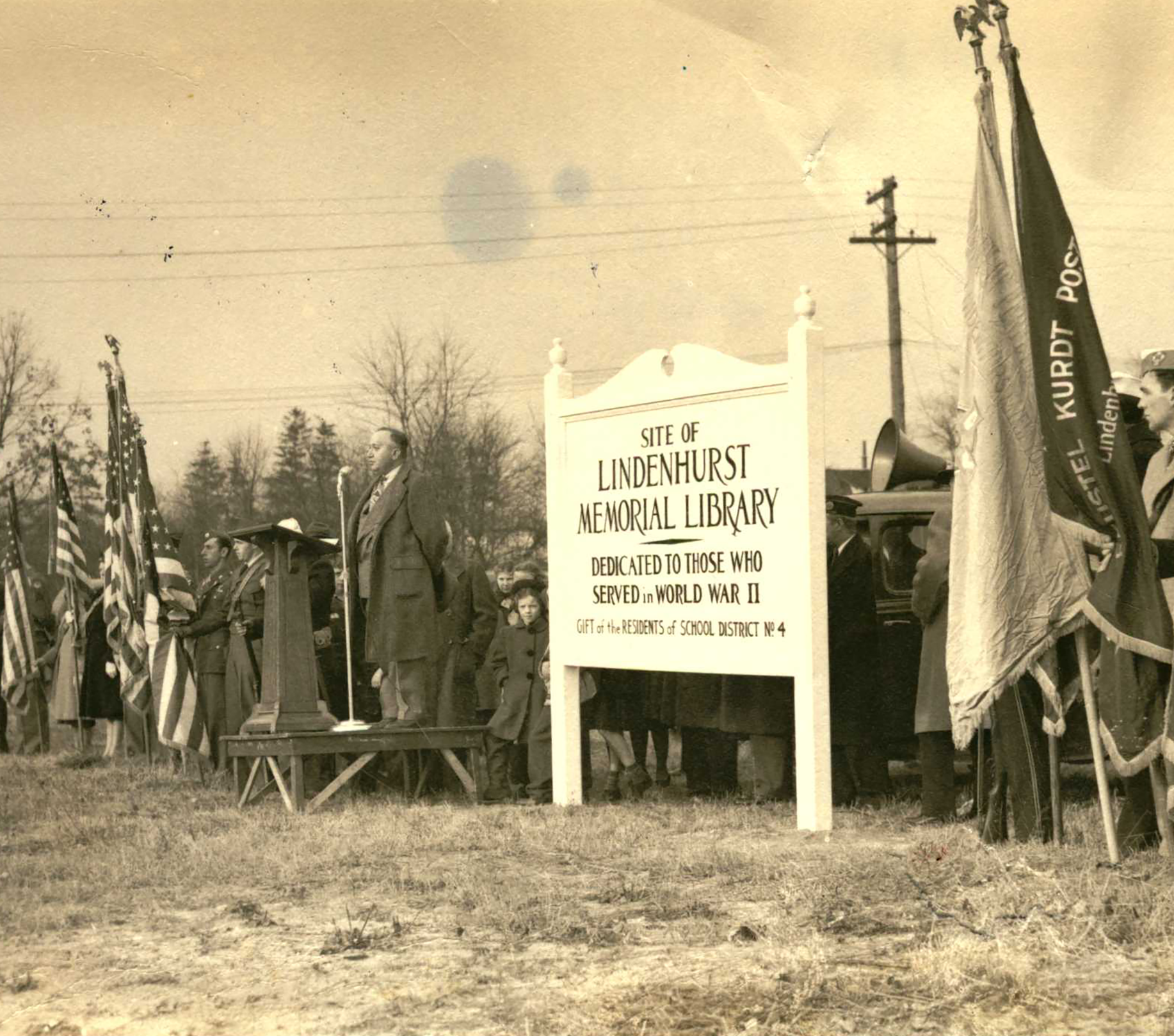 Voters approved a $142,000 proposition on October 19, 1951, to create a Village Hall, including the Library, and the latter was to be given free maintenance, heat, and light into perpetuity. In return the Library site was conveyed to the Incorporated Village of Lindenhurst. The Library and its facilities would be available to the taxpayers of the School District by having the District contract for the cost of library operation.

The Village Library opened in 1953 in the Village Hall building, with its first professional librarian – Mrs. Doris Young. She was only to assist with the setting up of the library, as she worked full-time for the Amityville Public Library. Mrs. Katherine Fisher replaced Mrs. Young for a salary of $50.00 a week.

Later, to meet the requirements of New York State for the library to be headed by a “college trained certified librarian”, the Board worked on recruiting a full-time librarian. Mrs. Joy Meisels was hired as a full-time librarian for an annual salary of $5,200 for a thirty-eight hour work week.

On May 6, 1964, voters approved a proposition changing the status of the Library from a Village Library into a School District Library. The Lindenhurst Memorial Library Village Charter was cancelled on October 7, 1964.

The beautiful, new Lindenhurst Memorial Library at One Lee Avenue was dedicated to the men and women who faithfully served their country in the time of war, on May 18, 1969. New York State granted the Library is Absolute Charter as a School District Public Library, on June 26, 1970.

A referendum to fully renovate and expand the building by approximately 10,000 square feet, for $14.4 million dollars, with an additional $500,000 from the Library’s capital fund, was defeated by tax-payers on November 14, 2017.

An October 2019 referendum to fully renovate and expand the building by approximately 3,000 square feet, for $9.4 million dollars, with an additional $500,000 from the Library’s capital fund, was passed by tax-payers.

Veterans and the Memorial Library
Archived Between the Shelves Blog
Archived Check Us Out Blog
Stay Up to Date!