Babe Ruth and Lou Gehrig were good friends and enjoyed visiting Lindenhurst to dine and fish at Barnacle Bill’s restaurant and docks on Montauk Highway along with other teammates. One of their fishing buddies was Addie Klein, the manager of the local amateur Lindenhurst Athletic Club’s baseball team, considered one of the best in the county. As many players did at the time, the two stars would form teams of other major leaguers and “barnstorm”, arranging exhibition games against local teams during the off-season, for a share of the gate. The afternoon of Saturday, October 18, 1930 was the date set for a game at Meridale Park, a diamond located on the north side of Montauk Highway at 2nd Street, between a team of major leaguers, including Babe and Lou, and Addie Klein’s Lindy Nine.

Below is a permanent exhibit at the Lindenhurst Village Museum (272 South Wellwood Avenue) commemorating this exciting event that was still recalled decades later by many of the estimated 4,000 fans who were there. The exhibit includes the original poster advertising the game, photos from the game itself, a baseball autographed by The Babe and artifacts and equipment from the Lindenhurst ball club. 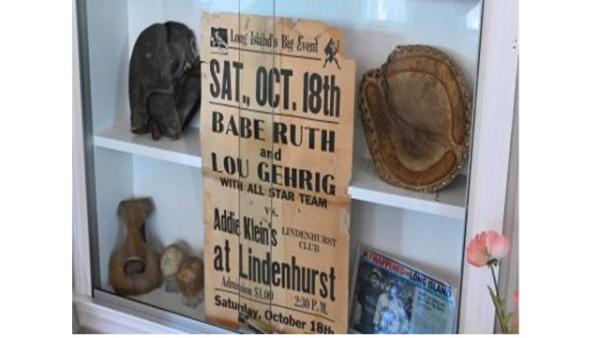 A close-up of the original poster advertising the game. 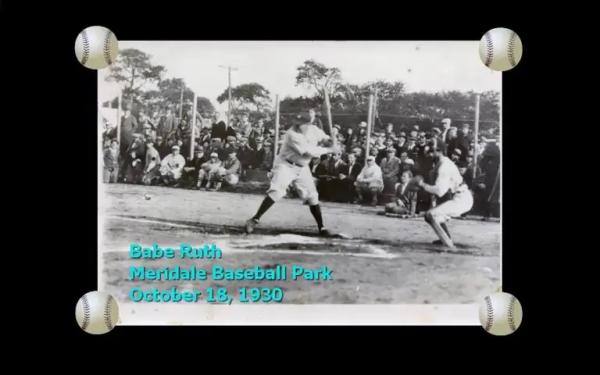 A photo of The Babe at bat during the game. The catcher is Myers of the Lindenhurst team. Alex Jaeger, an uncle of Lindenhurst Village historian Anna Jaeger, started for Lindenhurst and pitched through the 6th inning, giving up 7 hits and 4 runs. Babe Ruth himself pitched the final 2 innings for his all star team and got credit for the win. Lindenhurst right fielder Schroeder pitched the final 3 innings and took the loss. 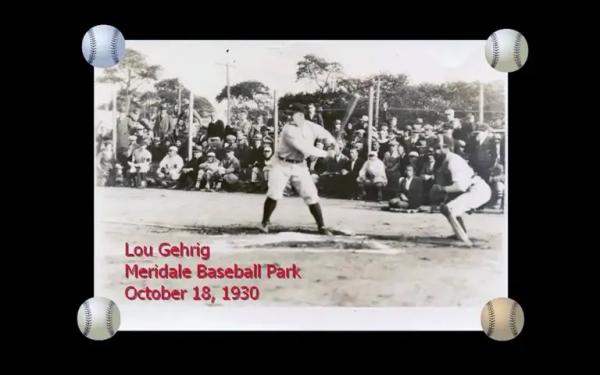 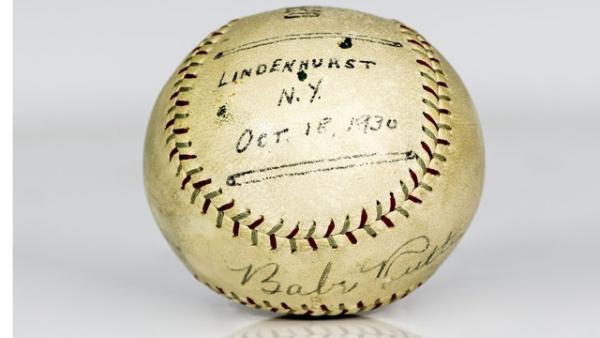 The first of two signed baseballs from the day, autographed by both Ruth and Gehrig. 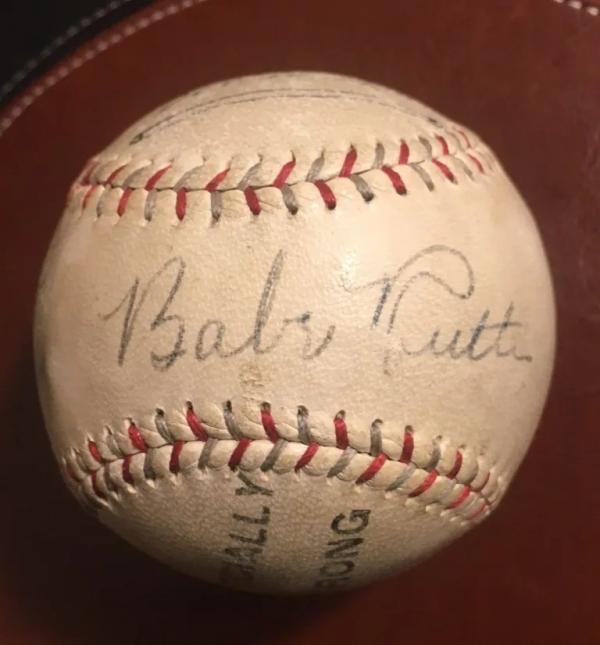 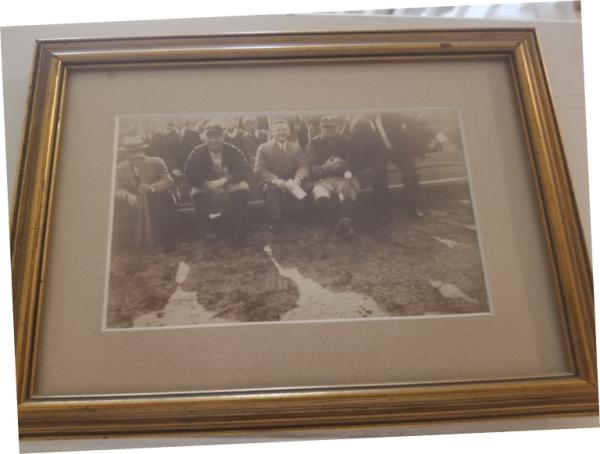 A photo taken at the game by local resident Alfred W. Hahn. Showing Ruth on the right, holding a baseball, with Gehrig 2nd from the left. The coats and jackets attest to the chilly weather. Another interesting fact shown in these photos is that Ruth and Gehrig both wore their full Yankee uniforms for this particular game. 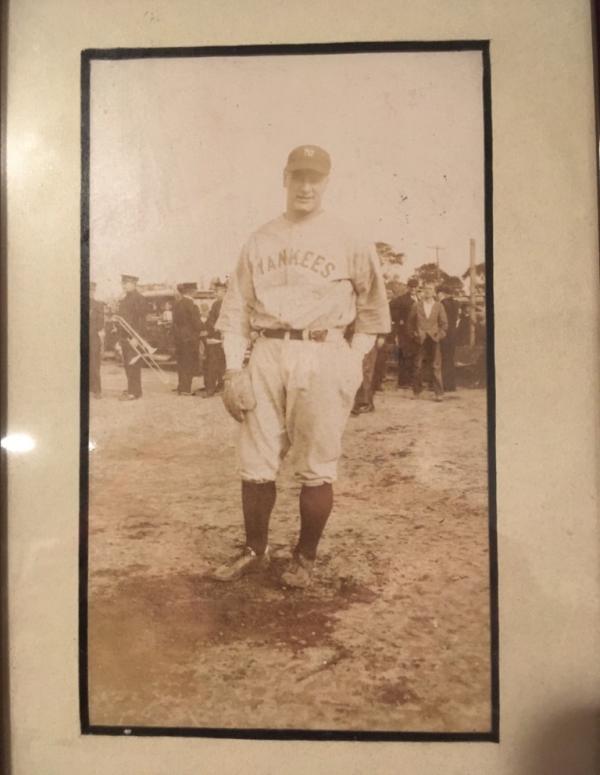 Ruth and Gehrig both wore their full Yankee uniforms for this particular game. 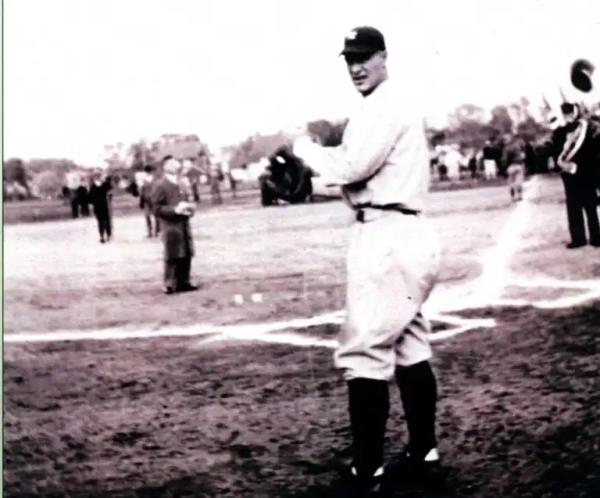 Another photo of Lou Gehrig taken on the day of the game. 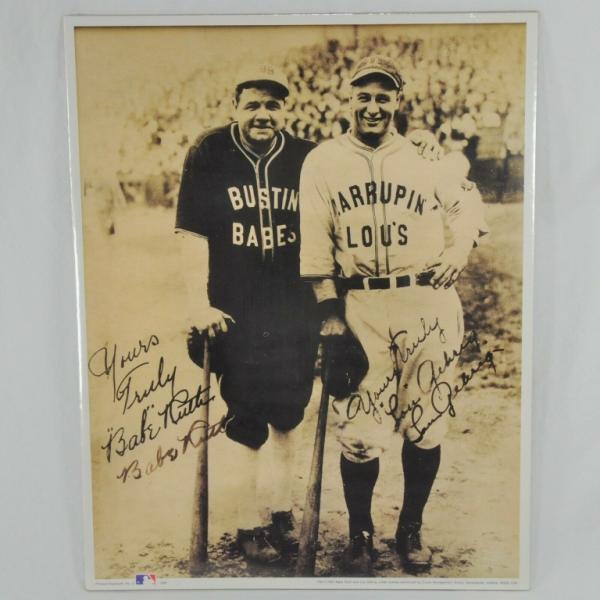 On other occasions, Ruth & Gehrig would head up 2 professional teams called the “Bustin’ Babes” and “Larrupin’ Lous” that would play each other in barnstorming exhibition games. For these events, they would wear the uniforms shown below. 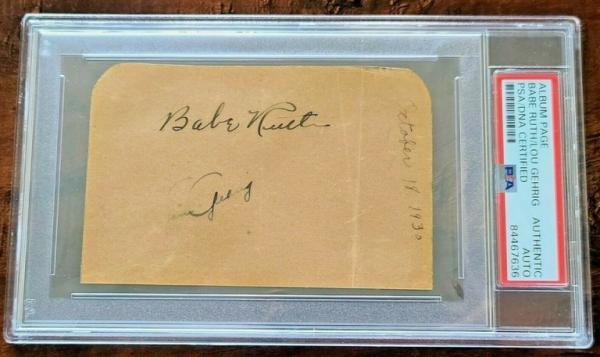 A card signed on the day of the Lindenhurst game by both stars, with the date on the right. 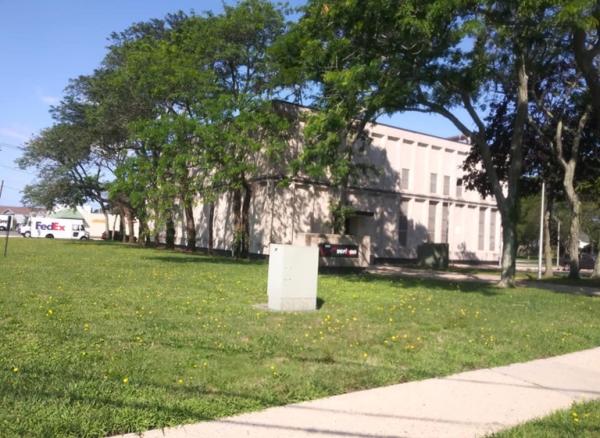 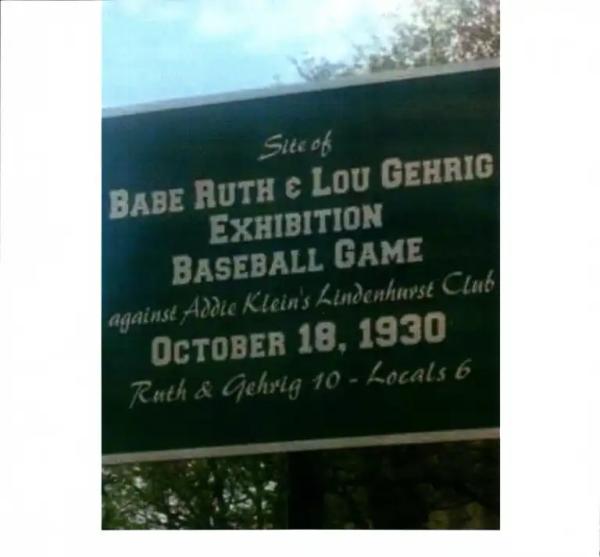 A sign at the site commemorating the game, with an incorrect final score. According to the Lindenhurst Star, which reported on the game, the final score was 10-4 in favor of the Ruth-Gehrig All-Stars. In fact, the score was tied at 4 entering the 9th inning, when The Babe sent his team ahead with a tremendous drive with 2 men on base. According the the Star: “The second pitch was shoulder-high, and that’s just where Ruth likes ’em. He took a healthy swing and ‘crack’ went the bat as the ball went sailing out over the rightfielder’s head! The ball landed just in back of the Old Homestead Inn, corner of Wellwood Avenue and Montauk Highway, and was said to be the longest drive ever seen on the home grounds…The most famous ballplayer in the world just grinned as he trotted at a slow pace around to third base where he halted, not wishing to continue on to home plate, apparently satisfied with the triple”. Gehrig then drove in Ruth with a single and 3 more runs scored to bring the final score to 10-4. Ruth, who took over pitching in the 8th inning, allowed one base-runner in the bottom of the ninth and took the win. The hitting star for Lindenhurst was 2nd baseman Gerwin, who had 4 hits, including 2 doubles. 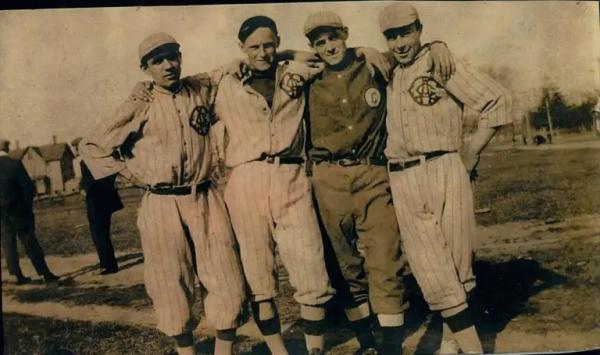 Members of the Lindenhurst Athletic Club team, including starting pitcher Alex Jaeger, 2nd from the right. 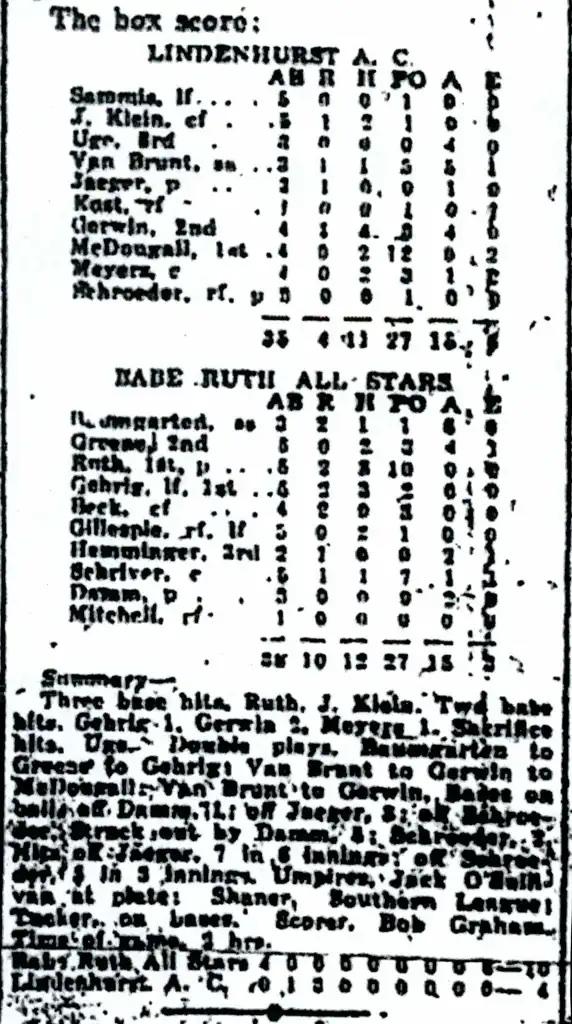 Finally, the original boxscore from the game, as published in the Lindenhurst Star (apologies for the blurred image).